For the first time, the new Mississippi state flag has been raised above the capitol, signifying a new age for the Magnolia State.

Months after the events that led to the removal of the state’s former banner, Governor Tate Reeves, surrounded by the members of the Mississippi Flag Commission at the Two Mississippi Museums, signed HB 1 into law ratifying the ‘In God We Trust’ flag.

“In Mississippi, there has been a prominent roadblock to unity. When many looked at out former flag, they just saw a symbol of the state and heritage they loved, but many felt dismissed because of that flag. That is not a firm foundation for our state. So today, we turn the page. We commit our former flag to history and we commit ourselves to the business of the future.”

A stone’s throw away at the building where the historic vote to remove the controversial flag occurred, its replacement was ceremoniously raised before a gathered crowd on the capitol steps.

The first flag to fly above the capitol was quickly lowered and folded before being returned to the Mississippi History Museum before a new one was then raised.

“Now, we turn the page on this new chapter in our state’s history. It is blank, it is yet to be written. What will it say? What will the history of this flag be? What will it stand for? Well, that is going to be determined by you, the citizens of Mississippi. The values that we promote and how we conduct ourselves moving forward will determine what this flag represents,” Speaker of the House Philip Gunn said.

Oxford Mayor Robyn Tannehill, one of the nine members of the commission that selected the design, was moved as the banner made its way to the top of the flag pole.

“This has been an amazing day for every citizen in Mississippi. I just had tears in my eyes watching that flag go up and thinking about this is the flag that our kids will see in school, they will learn to draw, they will learn under, and as the governor said, that we’ll serve under. It is a wonderful day for our state and it’s so wonderful to have a unifying symbol now for us to rally around”

The finality of today’s proceedings was the product of the passage of HB 1 by the Mississippi Legislature in the early days of the 2021 Legislative Session. The bill officially creates a new section of state code and ratified the new flag following the adoption of the flag by Mississippi voters in November. 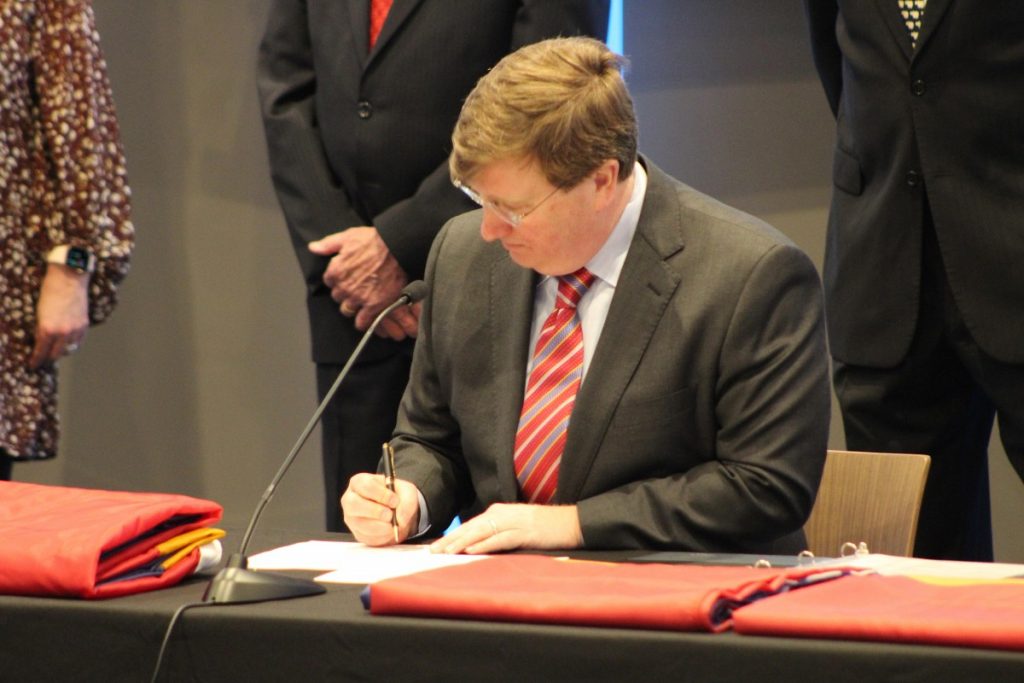