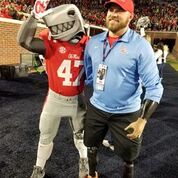 Travis Mills, a staff sergeant in the U.S. Army’s fabled 82nd Airborne, was on patrol in Afghanistan one day in 2012 when he sat his backpack down for a second.

The bag landed on a homemade explosive, and it went off. The next thing Mills knew, he could feel the bare bone of his left ankle touching his thigh, and see his arm laying away from his body. Parts of him were lying around.

He was airlifted to Landstuhl, Germany, to a military hospital where nine doctors performed 14 hours of surgery to save him. He was transferred to Walter Reed Army Medical Center near Washington, D.C., to recover in the United States. That process took 19 months. Ultimately, he would become one of only five quadruple amputees from the wars in Iraq and Afghanistan who survived their wounds.

“I went from 6-foot, 3-inches, 250 pounds to getting injured and having no arms and legs and losing 110 pounds,” Mills said. “From there, I went on to fight my way back and to learn how to feed myself and to dress myself so I could walk again, drive again, just rebuilding myself into who I am today.”

Mills recently was honored by the University of Mississippi’s Student Veterans Association and was given the VIP treatment during the Ole Miss vs. LSU football game.

The Michigan native who lives in Augusta, Maine, is the New York Times bestselling author of the memoir “Tough as They Come,” and he makes about 70 public speaking appearances each year, inspiring listeners with his story of perseverance and his motto of, “Never give up. Never quit.” He lives by those words, he said.

“I’m living that dream all day every day,” Mills said. “It doesn’t faze me to talk about it anymore. I can’t change what happened. I don’t dwell on the past. I know that I can’t control my situation, but I can definitely control my attitude.”

He and his wife, Kelsey Mills, who have been married 11 years, have a daughter, Chloe, 8, and a son, Dax, 2. This was his first visit to Oxford and Ole Miss, and the family loved the trip, he said.

“It’s a gorgeous setting,” Mills said. “We went to a tailgate, and to the chancellor’s box during the game and we got to meet the students veterans. We had a wonderful time.”

Andrew Newby, UM assistant director of veteran and military services, is an Auburn University graduate and met Mills at an event there. Mills’ story shows students what it really looks like to press on and rise above challenges, and it was important to expose Ole Miss student vets to that story, he said.

“When people think of veterans, it is often a nameless and faceless entity,” Newby said. “When people are able to see a quadruple amputee who served for them, for the nation, they are able to put this war into perspective. He went and did what we asked him to do, and he’s able to stand in front of us and tell his story.

“I’m proud to call him my friend and want to do what I can to get his message to as many people as possible.”

Besides honoring Mills, the SVA also honored some of its own with student awards as part of the Veterans Alumni Gala. The honorees were:

– Evan Ciocci, winner of the Initiative Award, which is given to the student veteran who most effectively displays the traits of initiative and ingenuity. Ciocci came to Ole Miss following his service in the U.S. Navy as somewhat shy, timid and reserved, but through a self-assessment has worked to grow his leadership abilities.

He served as vice president and president of the SVA and is an active member across campus, both in Alpha Tau Omega fraternity and on various leadership councils through the Division of Student Affairs.

– John Endres, winner of the Spirit Award, which is presented to the student veteran who most effectively displays the spirit of Ole Miss and its values. Endres is a first-generation college graduate who served in the U.S. Marine Corps as an infantryman.

As an undergraduate, he completed his Bachelor of Arts in political science with a minor in intelligence and security studies. The first college graduate in his family, he is pursuing a doctorate in political science and also interned in Washington for U.S. Rep. Trent Kelly.

– Jobie Charlie, winner of the Perseverance Award, which is presented to the student veteran who most effectively displays persistence and dedication to academic success. Charlie dropped out of high school after 10th grade to work in factories on the Choctaw Indian Reservation near Philadelphia, Mississippi. He decided one day in the factory that he wanted to earn his GED diploma. After five attempts on the math portion, he received his certificate and joined the Mississippi National Guard.

He deployed to Iraq in 2003-04. He enrolled at Ole Miss in 2012 and in April, he will retire from the Mississippi National Guard with 20 years of service before graduating in May with a bachelor’s degree in managerial finance.

– Connor Redding, winner of the Genius Award, which is presented to the student veteran who most effectively displays academic or creative genius. Redding, a freshman education major and U.S. Coast Guard veteran, plans to teach high school history, where he can be a positive influence in the lives of young people in underprivileged public school systems.

In his first semester, this student is working toward making a lasting impact in the places he is planted, and one day hopes to serve underprivileged kids in the New Orleans public school system.

– Scott Speelman, winner of the Dewey Knight Leadership Award, which is presented to the student veteran who encompasses those invaluable leadership traits effectively. Speelman, a U.S. Marine Corps major, is a nontraditional student enrolled in the School of Law.

He’s helped revitalize the Military Justice Society, a chapter of the Student Veterans Association for the law school, serves as an ambassador for potential veteran students and serves as a key connector to Ole Miss for those who exit service and consider law school. He also was appointed to the Dean’s Leadership Council, is president of the Business Law Network and works to promote social and academic interaction among the business community and students interested in the various aspects of business law.