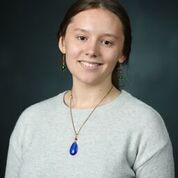 When Adele Cardwell was a junior in high school, her father, Dennis Cardwell, died unexpectedly. A week later, she made a 34 on her ACT.

The University of Mississippi freshman from Southaven has been through serious grief over her dad’s death and is on scholarship, but she still needed funds to cover her college costs. Recently, she was named a recipient of the Chucky Mullins Memorial Scholarship, along with fellow Ole Miss students Jamyracle Jefferson and Breyton Moran.

The three will receive $1,000 each per semester. The scholarship, which aids students with either a physical disability or extreme financial hardships, is supported by proceeds of the Great 38 Race, which is coming up Oct. 25-27 at UM.

Cardwell, who was adopted by Dennis and Gerri Cardwell, finished in the top 10 of her DeSoto Central High School class and is determined to pursue a career that will allow her to help others, something that was important to her father. A member of the Sally McDonnell Barksdale Honors College, she is considering nursing, social work or becoming a public defender.

The slogan “Never quit,” was the motto of Mullins, an Ole Miss defensive back who was paralyzed during a football game in 1989 but returned to the classroom in January 1991. Mullins died from complications from a blood clot in May 1991, but his courage and upbeat attitude were an inspiration to Ole Miss fans and the sports world alike.

Cardwell has been inspired by Mullins’ story of perseverance, she said.

“It’s nice to be compared to someone like that, but it’s intense to think about how it would be if I had a physical roadblock to overcome as well,” Cardwell said. “I do admire him for that. It’s hard enough just getting over the mental slump.

“As I learn more about him and his life. It feels like my work in high school has been validated and recognized, and getting a scholarship in the name of someone so inspirational is really cool.”

As for how she managed to make a 34 on her ACT the week after her father’s death, she thinks it was fate, and that he had a hand in it.

“I’m actually a little salty about that,” Cardwell said with a laugh. “I was one correct answer away from getting a 35.

Jefferson, a sophomore nursing major from Jackson who will begin nursing school in May 2020, is a first-generation college student. She was stressed before she began school in the fall of 2018 because she didn’t want to take loans out or ask her parents for money for school and put them further into debt.

“Receiving the scholarship has allowed me to focus on my academics without worrying about how I’ll have to spend my life paying back student loans or exhausting myself by trying to work during school to pay for my education,” Jefferson said. “Thanks to this scholarship, among others, I’m on track to graduate with no student debt, which was one of my biggest worries about college.”

Jefferson hopes to become a registered nurse, then become a nurse practitioner or a doctor of nursing practice, with a specialization in neonatal or obstetrics nursing, or even gerontology.

“Regardless of my specialty, I’m very excited to be able to use my career to advocate for patients and ensure they receive the best possible care,” Jefferson said.

She felt like it was her job to pay for her education, and the funds help her realize that dream.

“Although I didn’t have a clue how I would be able to do it on my own, I felt that it was my responsibility to pay for my education on my own,” Jefferson said. “I was so grateful when I finally saw the award notification and saw the multiple scholarships I was awarded, including the Chucky Mullins scholarship.”

“Run Oxford really appreciates and admires the ‘never quit’ attitude embodied by Chucky Mullins,” King said. “We wanted to do our part to contribute to keeping that spirit alive on the Ole Miss campus.

“More than 125 students have received support from the Chucky Mullins Endowment Fund, and we are thrilled to contribute our small share to that legacy.”

More than 560 have registered for the race so far, and the goal is to get 900 to 1,000 racers. The top three male and female finishers in each of the races receive prize money, and those who run the 8-mile race or the half-marathon get a Great 38 Race medal.

The race sticks to the football theme. The route finishes at the 38-yard line of Vaught-Hemingway Stadium. The day before the race, an expo will feature activities designed to get kids excited about exercise.

Besides raising money for students in need, the goal of Run Oxford, which co-sponsors the event with the Department of Intercollegiate Athletics, is to promote healthy habits.

The group still needs volunteers to work the day of the race, he said. For more information and ways to sign up, volunteer or donate, visit the Great 38 website.