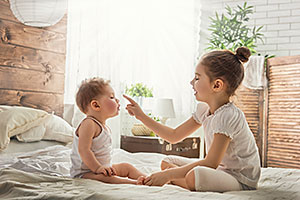 A virus that mimics a common cold, could prove fatal.

The symptoms of Respiratory Syncytial Virus Infection (RSV) can seem like a cold, but in reality could prove to be much worse.

According to the Centers for Disease Control (CDC), symptoms of RSV infection usually include runny nose, decreased appetite, coughing, sneezing, fever, and/or wheezing.  The symptoms usually appear in stages and not all at once.  In very young infants with RSV, the only symptoms may be irritability, decreased activity, and breathing difficulties.

RSV can also cause more severe infections such as bronchitis, an inflammation of the small airways in the lung, and pneumonia, an infection of the lungs. It is the most common cause of bronchitis and pneumonia in children younger than 1 year of age.

Almost all children will have had an RSV infection by their second birthday. People infected with RSV usually show symptoms within 4 to 6 days after getting infected.

The CDC says most RSV infections go away on their own in a week or two. You can manage fever and pain with over-the-counter fever reducers and pain relievers, such as acetaminophen or ibuprofen. Talk to your healthcare provider before giving your child nonprescription cold medicines, since some medicines contain ingredients that are not recommended for children. It is important for people with RSV infection to drink enough fluids to prevent dehydration (loss of body fluids).

Visits to a healthcare provider for an RSV infection are very common. During such visits, the healthcare provider will evaluate how severe the person’s RSV infection is to determine if the patient should be hospitalized. In the most severe cases, a person may require additional oxygen or intubation (have a breathing tube inserted through the mouth and down to the airway) with mechanical ventilation (a machine to help a person breathe).

There is no specific treatment for RSV infection, though researchers are working to develop vaccines and antivirals (medicines that fight viruses).

RSV can spread when an infected person coughs or sneezes. You can get infected if you get droplets from the cough or sneeze in your eyes, nose, or mouth, or if you touch a surface that has the virus on it, like a doorknob, and then touch your face before washing your hands. Additionally, it can spread through direct contact with the virus, like kissing the face of a child with RSV.

People infected with RSV are usually contagious for 3 to 8 days. However, some infants, and people with weakened immune systems, can continue to spread the virus even after they stop showing symptoms, for as long as 4 weeks. Children are often exposed to and infected with RSV outside the home, such as in school or child-care centers. They can then transmit the virus to other members of the family.

People of any age can get another RSV infection, but infections later in life are generally less severe. People at highest risk for severe disease include

In the United States and other areas with similar climates, RSV infections generally occur during fall, winter, and spring. The timing and severity of RSV circulation in a given community can vary from year to year.

Each year in the United States, RSV leads, on average, to:

In the United States and other areas with similar climates, RSV infections occur primarily during fall, winter, and spring.

The post RSV virus can be fatal if not treated properly appeared first on News Mississippi.