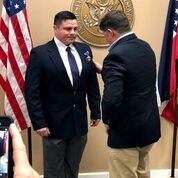 On April 5, 2009, Carter sustained injuries from an IED explosion while conducting dismounted clearance of a hostile village in Balad Ruz, Iraq.

“I am honored to present Staff Sergeant Carter with the Purple Heart. Moments like this are what make my job so special, serving as a reminder that we are forever indebted to our military men and women who have given so much in defense of our nation. I am eternally grateful for the sacrifices SSG Carter made and thank him for his unwavering commitment to boldly defending our country,” said Rep. Palazzo.

“I am overwhelmed with gratitude and appreciation for my country and those who have fought by my side in combat. My service was displayed by my uniform, but these accolades tell a much larger story. Receiving the Purple Heart medal means so much to me and I am grateful to have Congressman Palazzo present me with it. I am proud to be an American and to have served our country in the United States Army,” said SSG Carter.

Staff Sergeant Robert E. Carter served over 12 years in the Army on Active Duty from April 25, 2007 through May 30, 2019 as an 11B, Infantryman Sniper. On April 5, 2009, SSG Carter, A-Team Leader, 3rd Platoon, was conducting a dismounted clearance of a hostile village in Balad Ruz, Iraq. As SSG Carter and his team entered the building, they were met with the blast of a pressure plate house borne improvised explosive device (IED). The explosion projected SSG Carter’s team outside the building and resulted in the death of one soldier while injuring several others, SSG Carter among them.

The Purple Heart is awarded to members of the armed forces who are wounded by an instrument of war in the hands of an enemy or posthumously to the next of kin in the name of those killed in action.