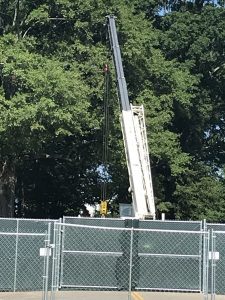 Workers started the removal of the controversial Confederate statue in the middle of the Ole Miss campus early this morning.

The monument, which has stood in the Circle since 1906, has been the topic of conversation for many years as many state it is offensive to have it at the main entrance greeting all who come to the University of Mississippi’s campus.

With the recent Black Lives Matter movement and state flag debate happening across the nation and state, it was only a matter of time before the statue was brought up again to be removed.

Staff members, former and current students, and others adopted a plan last year that would move the statue from the center of campus to the Confederate cemetery that is on campus behind the Tad Smith Coliseum.

This plan was introduced to the Institutes of Higher Learning (IHL) March of 2019 and was approved this year on June 18th, 2020.

The new proposed site for the monument that was leaked to the public, included the plans to move the statue, plans to construct a well-lit path to the monument, installation of benches, and cameras around the property.

These “changes” made some people upset with them saying it would be turning it into a “shrine” or “beautifying the confederacy.”

Chancellor Dr. Glenn Boyce later released a statement clarifying that the leaked proposal was not final and not to let those artist’s photos overlook the fact that the statue is actually being moved.

“This is a historic accomplishment for our campus, and I am saddened that my decision to move forward with the artist’s renderings is jeopardizing the excitement we have over the monument being relocated,” Dr. Boyce said. ” I recognize the frustration with the process, but my intentions were to expedite the process to get the outcome that our campus shared governance leaders and external stakeholders fought so hard to accomplish.”

No updated plan has been announced but crews are expected to have the statue removed from its original place by the end of the day.