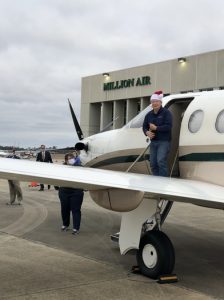 Veterinarians at the Mississippi Aquarium and the Institute for Marine Mammals Studies Inc. (IMMS) in Gulfport are assisting in the recovery of 45 endangered Kemp’s ridley sea turtles.

The turtles, which became ill and stranded due to an annual cold-stun event that occurs between November and January each year, were transported from Cape Cod, Massachusetts to Mississippi today.

25 of the endangered turtles will be rehabilitated at the Mississippi Aquarium while the remaining 20 will be taken to IMMS. As explained in a news release, the illness is caused as the cold-blooded turtles became trapped when their southbound migration was delayed, forcing them to stay in waters that cooled down gradually as the season progressed. When the turtles were discovered on the shore, the long exposure to cold water caused them to become lethargic and stop eating regularly.

“This cold-stun season has been demanding. ‘Turtles Fly Too’ has transported almost 500 of the over 800 stranded sea turtles to locations in the south. Securing pilots is becoming challenging due to the volume of flights,” said Leslie J. Weinstein, President of Turtles Fly Too, a nonprofit with over 350 “Turtle Fliers” that sign up to fly endangered species and other compassion flights throughout the United States.

Once they arrive, the veterinary team at the Mississippi Aquarium will conduct thorough medical exams on the turtles to assess their needs and best recovery plan moving forward. Once the turtles have been rehabilitated and receive all the medical care required they will be released in the Gulf of Mexico.

“Mississippi Aquarium is extremely excited to be able to help save endangered sea turtles,” says Alexa Delaune, DVM Mississippi Aquarium Vice President of Veterinary Care. “We will be providing the best veterinary care possible to each individual turtle, so they have the best chance of being released back into the Gulf. This project directly aligns with our mission of conservation at Mississippi Aquarium. We are so thankful to all of our partners who are making it possible for us to help these sea turtles.”

This rehabilitation process can take a few months for a full recovery. The time of release also depends heavily on the gulf waters warming up prior to releasing the turtles.

This effort is made possible through a collaboration between The National Oceanic and Atmospheric Administration (NOAA) Sea Turtle Stranding and Salvage Network, Turtles Fly Too, Mississippi Aquarium, Institute for Marine Mammals Studies Inc. (IMMS), MS Department of Marine Resources (DMR) and US Fish and Wildlife Services (FWS).