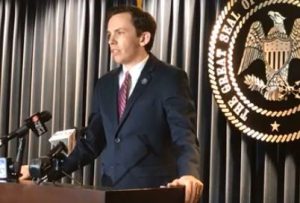 According to a report by State Auditor Shad White, classroom teachers in Mississippi were given smaller dollar-amount pay raises, on average than superintendents, deputy superintendents, and assistant principals from FY 2013 to 2016.

“We have some great school districts doing an excellent job putting money into teachers and the classroom, but the overall data clearly show a concerning trend,” said Auditor White. “We as parents, taxpayers, and teachers need to demand that money be spent closest to the students.”

The report also showed the ratio of deputy superintendents to students increased compared to the same ratio for teachers since 2013.

“Mississippi is not doing considerably worse than our peer states that we surveyed for this report, and that is a good thing,” added White. “But we’ve got to be better stewards of public education funds than our surrounding states if we’re going to catch up.”

This latest report is one in a series that started in April 2019 from the Auditor’s office on public education spending. “I was educated in our public schools from kindergarten to my graduation from a Mississippi public university, and my mother was a public school teacher here for 35 years, working on her feet, every day. My grandmother and grandfather met as public school teachers in Mississippi. I have a deep, personal commitment to making sure money is spent effectively in our schools,” said White.

The April 2019 report from the Auditor’s office showed Mississippi’s spending on administrative costs has gone up faster than spending on instruction over the last ten years. The November 2019 Auditor’s report showed Mississippi spends more money outside the classroom than most other states in the South. Auditors also found spending per student on teachers’ salaries has gone down by 3% over the last ten years, but spending on administrator pay has gone up 10% after adjusting for inflation.

As a next step, the Auditor’s office is launching a pilot project with three school districts around the state in June, using the latest data analytics technology to identify administrative cost-savings that can be pumped back into teachers and the classroom. The project will be complete in early 2021.

Reports – including all three education briefs – can be found by searching under the “Reports” tab at www.osa.ms.gov.