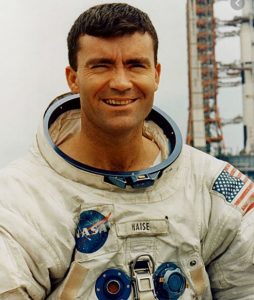 A recent phone conversation with a prominent Mississippian gave me the rare opportunity to revisit one of the most memorable events in our nation’s space program. At the same time, my chat with 86-year-old Biloxi native Fred Haise caused me to reflect on some of the similarities between our current COVID-19 crisis and the situation faced by the Apollo 13 astronauts 50 years ago.

On April 13, 1970, Haise and his crewmates, Jim Lovell and Jack Swigert, were one day away from America’s third moon landing when a sudden mechanical failure forced a change in plans. An electrical short near the ship’s oxygen tanks ignited a fire that triggered an explosion, crippling the ship and causing it to bleed oxygen out into space. Instead of going to the moon, their mission was now to get home alive.

Beating the odds with ingenuity and grit

According to Haise, the intense pressures of the situation brought out the very best in our space program, leading many to call it NASA’s finest hour. NASA’s engineers invented one solution after another to help the crew overcome obstacles. One critical step was rigging up a makeshift air filter to offset the carbon dioxide produced by their own breath. This and scores of other measures enabled the crew to survive for four days until they re-entered the Earth’s atmosphere and splashed down in the South Pacific. The happy outcome and the heroic work of all involved led Captain Lovell to call the mission a “successful failure.”

Our nation’s challenge with COVID-19 has parallels to Apollo 13. Americans began the year enjoying historic levels of economic growth and prosperity. Then came the coronavirus, forcing us to shut down much of our economy and interrupting our lives. Plans for weddings, graduations, and entire athletic seasons have been disrupted.

But just like the Apollo 13 crisis, this challenge is bringing out the best in American ingenuity and resolve. Our health experts are giving us scientifically proven steps to help contain the virus. Researchers are racing to develop a vaccine to protect against another possible outbreak. Testing kits are being mass-produced, and new tests are being developed that will yield fast results and allow for self-testing. Meanwhile, a lot more moms and dads are learning to homeschool.

Haise told me he never lost hope in the professionals at NASA and their resolve to bring him home. That same spirit is alive today in folks like UMMC’s Dr. Mit Robertson, who has designed a ventilator that can be assembled in 30 minutes – reminiscent of the astronauts’ makeshift air filter and making Mississippi stronger in case of future outbreaks.

This can be our finest hour

As Haise, Lovell, and Swigert splashed down in the Pacific, they expected to be regarded as part of a failed effort. Instead, they were received as heroes, having been prayed for by millions around the world. We are seeing a similar faith at work in today’s crisis. Americans are praying in vast numbers, and recent Easter services were the most widely viewed in history thanks to digital technology.

Like NASA experts in 1970, America’s dedicated workforce needs our prayers today. They have the creativity and determination to help us weather this crisis if we pull together and do our part. Someday we can look back on 2020 as another of our finest hours.