The state was in the national spotlight Saturday as the first steps were made to move toward changing the state flag.

News Mississippi will be bringing you the history making story as it unfolds today.  We’ll have updates from the state capitol and analysis of the events throughout the day.  You can also follow News Mississippi on Facebook and Twitter for up to the minute information.

As Steven Gagliano reported, what follows is a recap of the events as they occurred on Saturday.

With the nation watching closely, today was a historic day in the state of Mississippi.

Both chambers of the Mississippi Legislature have adopted a resolution to suspend the rules, allowing for the introduction of a bill to remove and change the controversial state flag which carries the Confederate battle emblem.

It took two meetings this morning, but the House Rules Committee eventually got the ball rolling by sending HCR 79 to the House Floor, where it was promptly passed by an 84-35 margin.

During the introduction of the resolution, Rep. Jason White gave an overview of what the forthcoming bill might look like.

The bill, which will be introduced on Sunday, would remove the current state flag immediately and establish a commission to design a new proposed state flag with two stipulations – no Confederate battle emblem and it must include the phrase ‘In God We Trust.’

According to White, the commission would be made up of appointees selected by Governor Tate Reeves and legislative leadership – Speaker of the House Philip Gunn & Lt. Governor Delbert Hosemann. Rep. White also envisions involvement from the Department of Archives and History and the Arts Council.

That design would be submitted to the Secretary of State’s Office by September 14th and placed on the ballot for the people of Mississippi to vote on in November. If the design doesn’t receive a majority of the vote, a new design would be drawn up and voted upon.

The full resolution can be read, here.

Prior to the House vote, Rep. White acknowledged that the Mississippi flag means different things to different people. “I know many people who have ancestors and love everything about the bravery of the people that they read about & they hear about in their linage that fought for the Confederacy. I know those people, I’ve heard these stories and I get it. I know there are many good people who also believe that this flag is a symbol of our southern pride and heritage, but for most people throughout our nation and the world, they see that flag and think it stands for hatred and oppression, that too is simply a fact. It is one we cannot sit here and deny,” White said.

He went on to say that the argument that the removal of the divisive emblem on the flag will lead to a “slippery slope” is misguided.

“Changing the flag doesn’t logically lead to that conclusion,” White said. “By changing our flag, we don’t abandon our founding principals, we embrace them more fully by doing what is right. We’re not moving further away from our founding fathers’ visions, we’re moving closer to them. We are not destroying our heritage, we are fulfilling it.”

After the bill passed the House, the next stop was the Senate Rules Committee. Its members sent it to the Senate floor, where many expected a close vote. Before discussion on HCR 79 could begin, a vote had to be taken in order to bring it before the Senate. It passed 36-14.

Prior to the vote, Senator Chris McDaniel spoke out against legislative action on the flag, stating that the people of Mississippi should vote on the issue. His comments were followed by Senator Barbra Blackman and Senator Hillman Frazier who each spoke of the historic nature of the vote that was about the be taken.

A voice vote was then taken, and by the same narrow margin of 36-14, the resolution passed. 35 votes were needed to meet the two-thirds threshold.

The Senate’s vote signified the end of the first half of this long process.

The adoption of the resolution in both chambers will now allow for the introduction of a bill to remove and change the state flag. The resolution was necessary due to the passage of legislative deadlines earlier in the session.

When the bill is introduced on Sunday, it will follow the traditional legislative process and will require just a simple majority in both the House and Senate.

If the bill passes, Governor Tate Reeves has indicated that he will sign it.

Following today’s events, Lt. Governor Hosemann reiterated that while this was a monumental step, there is still work to be done.

“We needed to step forward in Mississippi. This is that one step. We have many steps to take yet, but the first step in that journey was taken today,” Hosemann said.

Speaker Gunn said that today’s vote is part of the process to move Mississippi forward. “This is the right thing to do. It will work to the betterment of our state. It’s change. Change is hard. People are going to resist initially, but I think over time, it’s going to be proven that this was the right decision.”

Lawmakers will now work on drafting the bill.

The post A vote by lawmakers on a bill to change the state flag is expected today appeared first on News Mississippi. 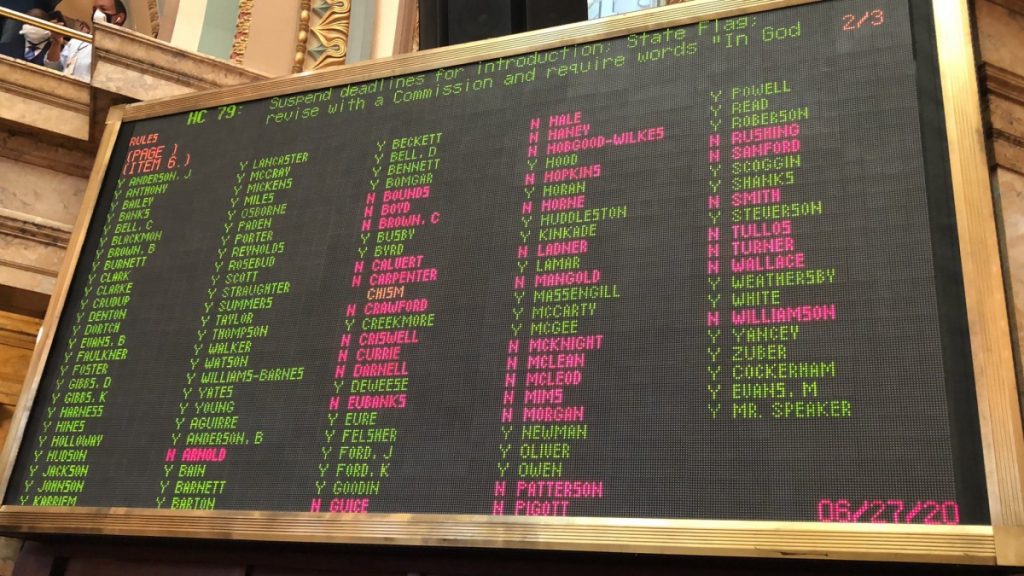